The value of using metaphors as a Participatory (Research) Method

Most of the students graduating in these difficult COVID times within the Lab have the misluck of carrying out their research through participatory design approaches beyond a screen, preventing them from engaging with people in real life. These bring extra load on their shoulders. However, what if we reframe challenges as timely design challenges to practice a resilient and problem-solving attitude?

Designers tend in fact to be celebrated for being highly adaptive, finding creative ways to go around the problems to solve these with whatever resources available (Price, 2020). This was how PCM Lab graduate student Chiara found her way to deal with the pandemic restrictions; she used a participatory research approach to engage with multiple stakeholders in an online setting. For her graduation, she partnered up with the DESIGNSCAPES project and had the opportunity to collaborate with different urban innovators. In particular, she engaged with them to learn from their experiences and knowledge regarding scaling social innovations.

Design researchers’ job is to learn about people’s experiences and behaviours; to do so, Chiara employed different design elements and tools during her graduation journey. Particularly, one tool helped her more than others: metaphors and visual narratives. Through visual metaphors and analogies techniques, she learnt about the scaling processes and main challenges of DESIGNSCAPES urban initiatives. Although the sessions were held online, those techniques allowed Chiara to engage with initiatives in a participatory manner and gaining more in-depth insights.

Using metaphors to deal with abstractness

According to Caskin (2007), metaphors can act as useful tools to understand and make sense of what is ‘fuzzy’ or unfamiliar. They help make things visible and have the power to ease collaboration and engage people (Price et al., 2018; Sanders & Stappers, 2018; van Boeijen et al., 2013).In scaling, social innovators have to meet the new local needs, interact and collaborate with unknown stakeholders and probably acquire new knowledge and capacity. Metaphors could be helpful to replicate into an unfamiliar context. Next to facilitating and understanding, metaphors can also help the communication between different people who come from different cultural backgrounds and have different perspectives or ways of thinking, especially when referring to complex or abstract concepts. In this case, metaphors can be used to create a sort of common ground everyone could easily relate to.

During the first interviews with the urban innovators, Chiara found it challenging to communicate and deal with abstract concepts, such as culture. Culture is indeed a broad and complex concept, that could be interpreted differently by people from diverse backgrounds. In this case, metaphors appeared to be helpful in dealing with abstractness. Therefore, she decided to use food as a common and tangible analogy to explore the concept of culture when scaling to another context. 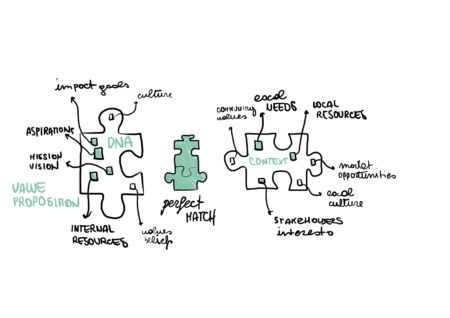 How did Chiara made use of metaphor in her research and which metaphors did she explore?

Scaling as a cooking process

an exchange of knowledge and culture

During the initial part of her research project, Chiara organised multiple creative sessions: the ‘Pizza Workshops’. During these sessions, she invited various Designscapes initiatives to participate; the goal was to uncover the socio-cultural and contextual factors influencing the scaling capacity. Indeed, Chiara discovered that one of the main challenges for hyper-localised social initiatives willing to replicate in new contexts is dealing with a different culture, social infrastructures, people needs, habits or other political and contextual factors. “It is like trying to transfer the ‘traditional recipe of the Italian pizza in a completely different country”, she said – the ingredients available or the tastes and preferences of people might be different.

I think that we also need to realize the existing differences and valorize them as much as we can. The thing that we are going to find in Sicily, we have to be mindful of the differences in the ingredients that we have on the table. 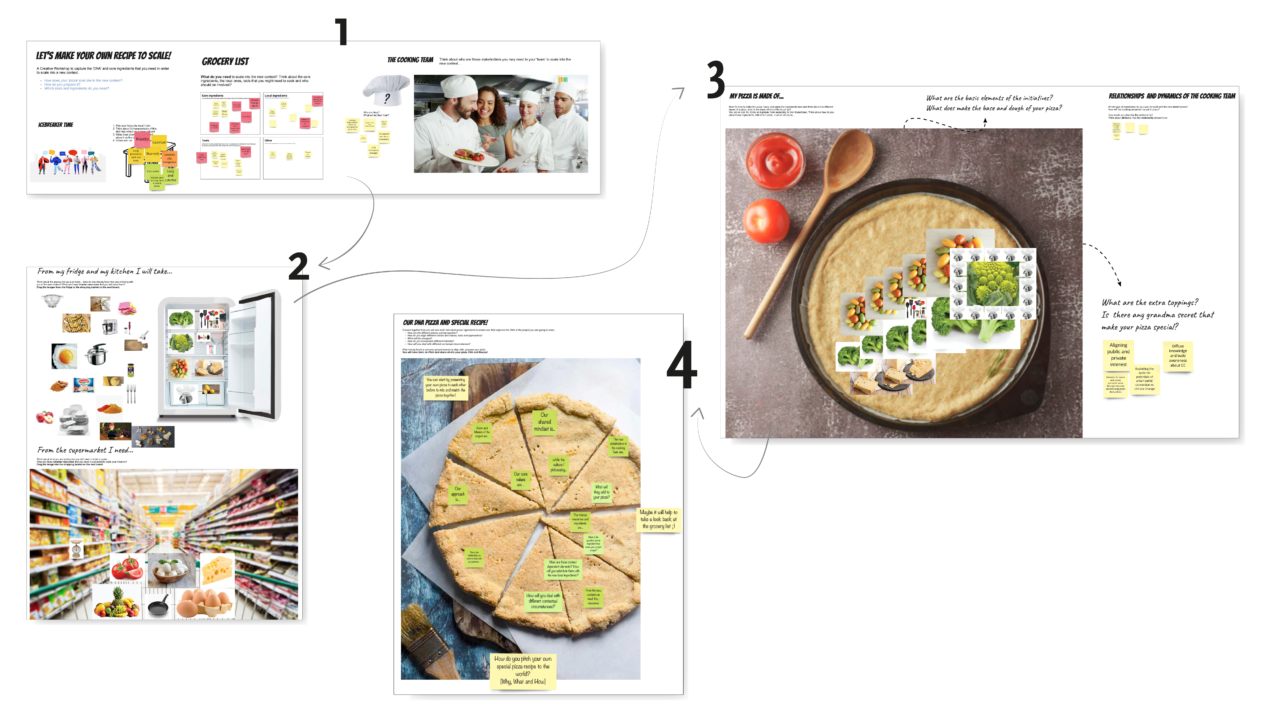 From these ‘Pizza Workshops’, Chiara understood that scaling is like a cooking process, and as such, everyone can cook, but everyone will cook differently, and every time in a different way. In fact, Social Innovation is deeply rooted in a complex ecosystem of interrelated factors that influence the overall result and process. It is not only about deciding which ingredients to replicate. What matter most is how these are mixed and ‘cooked’ together, how knowledge and experience are exchanged between the people involved, the collaboration, the process and strategies adopted to get the result wanted.

With the positive insights gained during the ‘Pizza Workshop’ about the metaphor technique, Chiara decided to employ metaphorical storytelling also to develop her concept prototype. In particular, she decided to explore the analogy of ‘Scaling as an Interstellar Journey’, using this metaphor as well as visual narratives to navigate the users through their scaling process, empower and facilitate them overcoming the challenges they face along the path. Chiara started experimenting with this metaphor with an explorative question in mind: ‘can metaphors help to guide urban innovator to proceed with confidence in their scaling journey?’

By exploring the use of metaphors in various creative sessions and in different ways, Chiara realized that they are not only good to deal with abstractness, but are valuable for several other reasons.

Even online, using metaphors kept participants’ attention high throughout the whole session, and generated a more intimate interaction between the people involved. In fact, participants felt at ease to express mutual appreciation and engage in open discussions at a deeper level.

Since it was fun and playful, I did not feel it was 1.30h of the workshop. Compared to others where in the end, you lose engagement and get easily distracted (especially in remote).

Having these metaphors with food made us think about this problem, the challenges of the project from a different perspective. That is a bit more light.

On the other hand, Chiara also learnt that this technique should be used carefully in order to prevent generating even more confusion among participants. In fact, it needs to be acknowledged that metaphors could be still interpreted differently, especially when people come from different cultures. Hence, Chiara decided to use this technique as a communication mean combined with more concrete examples and tangible visual storytelling everyone could easily understand.

In conclusion, metaphors and visual storytelling accompanied and eased Chiara’s whole graduation journey from beginning till the end. She learnt that using metaphors and analogies prompts to express things that are otherwise hard to describe, enabling participants to express themselves clearly. Moreover, metaphors and visual narratives can create a playful environment perceived as safe from the participant’s perspective who feel comfortable and at ease sharing deeper insights. As result, metaphors have the great power of triggering engagement, even in an online setting.

Therefore, this design element empowered the DESIGNSCAPES initiatives to gain more control over their decision-making process and proceed with confidence in the scaling journey.

Forced by the COVID situation, Chiara had to find new ways to engage and collaborate with people beyond a screen. Quite creatively, she found her way of carrying remote participatory research and online creative sessions through the use of metaphorical storytelling. Metaphors and visuals helped Chiara to empathise, communicate and facilitate with multiple stakeholders, helping her to succeed in her project with fun!

Written by Chiara Marradi, the work described in this article is part of a graduation project held in collaboration with DESIGNSCAPES and supervised by Alicia Calderon Gonzalez and Ingrid Mulder.