Pica grant for Olindo Caso in the MAKERLAB Project

January 2021 – The Pica Foundation promotes and stimulates the provision of scientific and public information in the Netherlands. It does this by subsidising projects and activities that transcend the interests of individual libraries and promote cooperation among libraries. Pica recently granted a subsidy for the MAKERLAB project: a collaboration between National Library of the Netherlands, TU Delft, Rotterdam University of Applied Sciences, FERS, Hoeksche Waard Library, Hengelo Library, Rivierenland Library and Gorredijk Library. The TU Delft participation is coordinated by Olindo Caso, who has had a key role in the elaboration of the project proposal, by connecting Architecture + Built Environment (A+BE) and Industrial Design (IDE) in a Research Through Design setting under the FLL umbrella. The total project budget amounts to 450k, of which 120k is for the TU Delft.

Experimental gardens for the making culture

MAKERLAB builds upon previous research experience like Olindo Caso’s NWO-KIEM funded Performative Spaces in Dutch Public Libraries: Stepping Stones of Inclusive Innovation (2017-2018), in partnership with National Library. The project aims to set up ‘makerspaces’ at four public library locations in the Netherlands, in which to experiment with different forms of programming, equipment, spatial configurations and local embedment. MAKERLAB is therefore intended as a testing ground for innovation around makerspaces in libraries. Within the two-year project, design research is conducted into the programming and design of makerspaces informed by their specific local context, and new methods will be developed for monitoring the impact of makerspaces. The approach will become part of national library visions and programs such as Lifelong Development and Digital Literacy, and provide (research) instruments that will be made available for the entire library sector. The project will run from January 1st, 2021 to December 31st, 2022.

Collaboration is central to this project. The four libraries will function as living labs: they will experiment with the design, layout and programming of their makerspace. Within the project, monitoring of the impact is an important element, as are networking and knowledge sharing. A peer group is formed with forerunners in the sector who will act as critical friends. The knowledge gained is shared at various times with the library field and with experts from other sectors, so that everyone benefits from this project.

A makerspace is a publicly accessible creative DIY space where people can come together to create, invent and learn. They are in line with people’s natural need to learn through experience. In the context of lifelong development, libraries are the ideal places to nurture lifelong curiosity.

NWA funding for Cynthia Liem and the Future Libraries Lab

8 July 2020 – The project proposal ‘Recommender requirements for pluriform perspectives in local public
libraries’ of Cynthia Liem, written in the context of the Future Libraries Lab, and including the
National Library of The Netherlands as a project partners, has been one of the 40 successful
projects that were granted EUR 50,000 of funding under the NWO ‘Idea Generator’ 2019-2 call.
This call is part of NWO’s funding schemes of the Nationale Wetenschapsagenda (NWA): the
national science agenda. NWA Idea Generator projects should distinguish themselves by their
innovative character and possible impact on society.
In our increasingly digital information society, the role of the local public library is changing.
While it may not be the primary source for knowledge anymore, it still is a valued, accessible
social gathering space for demographically and socio-culturally diverse local communities. It
also still is a place where people can encounter new literature in physical and digital form.
Public libraries do not have a commercial mission. As such, they can afford confronting citizens
with a more pluriform and polyvocal set of perspectives, opinions and expressions than
naturally would be encountered on their own. Being confronted with such contrasting perspectives may not necessarily be pleasant.

However, as libraries are not as strongly driven
by short-time engagement optimization as their commercial counterparts, and as they offer
trustable, relatable and local in-person support, they may be able to get citizens out of their
comfort zones in more nuanced and tolerable ways than would be possible through commercial
online services.
Several public libraries are interested in novel recommender systems technologies, that can
offer pluriform and contrasting perspectives to users, and offer society a more diverse and
inclusive information environment. Such recommenders are delicate to build. Before doing this, it is important to get clear what users would naturally be (un)willing to see, and to concretize what diversity and inclusion would mean in the context of library collection curation and personalized filtering, and within the ultimate technical framework of a recommender system.
Dr Liem will tackle these questions through a 12-month research and co-creation project,
supported by assistants in the Future Libraries Lab. Capitalizing on recently centralized and
digitized data on library collections, consumers and loan records, we will seek to understand
past and current consumer behavior (which has not yet been affected by digital
recommenders), and use this understanding to engage with local professionals and citizens, to
jointly establish requirements and success criteria for the desired future library recommenders.

From bibliobuses to community librarians

7 April 2020 –The system of public libraries has been under pressure for years. The corona crisis once again shows what value libraries have for municipalities and individuals. “Instead of hoarding toilet paper, I am hoarding books.’https://www.groene.nl/artikel/van-bibliobussen-tot-community-librarians

6 February 2020 – Today, the KB and Delft University of Technology are launching the Future Libraries Lab, where designers and computer scientists think about the library of the future. What new forms of services can libraries develop? And how can they continue to offer their physical and digital collections in innovative ways? These and other topics are being researched in the Lab.https://www.kb.nl/ob-kb/nieuws/2020/kb-en-tu-delft-lanceren-future-libraries-lab 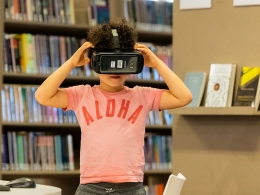