During their third semester of the master's in Strategic and Product Design, Malena López and Willem Zwagers wanted to gain a more in-depth understanding of sustainability and its relationship to Design.

They wanted to understand the impact of our everyday lives, and the possibilities of using Design to tackle the problems related to transitioning to a more sustainable way of living.They decided to follow the “Sustainable Innovation and Transitions” course offered by the Technology, Policy and Management faculty and “Design and the City” course provided by the Participatory City-Making Lab.

In each of the courses, they used different approaches to analyze different perspectives on sustainability-related challenges. However, by following both courses, they noticed a missing link to help make sustainable transitions more actionable. They saw that the literature provided by the courses served as a background to create a macro-scale analysis. Still, when they were challenged to translate that to a set of actionable steps, it was not clear how it was possible to implement that analysis.

But, where is the action?

Questioning if that gap had already been addressed and, if so, how it was being treated, next they decided to continue their research by getting involved with the Participatory City Making Lab through the research elective track. Under Ingrid Mulder’s supervision, the resulting investigation was published in the special issue of the “Human side of Sustainability” of the international Sustainability Journal.

In light of their master’s background, Malena and Willem understood the relevance of comprehending and analyzing sustainable challenges on a system level. They both were aware that this step is critical when developing strategies that support and promote change in an increasingly complex society. However, they also learned that the proposal should also consider implementation to make any plan or strategy successful.

Through their learnings in the “Design and the City” course, they observed the importance of focusing on a more individual and human-scale as they worked with a grassroots aquaculture initiative and its founder. Trying to create a strategy for the project to scale-up. Malena and Willem understood more tangibly that if a change needs to happen, the persons involved in that change need to be considered in the picture: because in the end, we, the humans, are the ones who need to activate those changes. For them, that perspective makes Human-Centeredness an exciting approach to research and analyze transitions in developing a more action-focused strategy.

Malena’s and Willem’s journey through their research started by immersing in the Socio-technical Sustainable transitions literature to locate all the gaps that could say something about the humanity of sustainable transitions. The most interesting step in their path was to link the Human-Centeredness theory of their design practice with the technical and reductionist approach that the sustainable transitions scholars use to analyze transitions. They found out that there seems to be a disconnection between the world we live in and the world as studied (Trickett et al. 2009).  They used the learnings gained and applied a human-centered approach to creating a theoretical framework that could help bring the human-scale to the analysis and, in doing so, “clarify the pathways for action and give a more tangible perspective on sustainable transitions” (López Reyes et al. 2020). They refer to the developed framework as the Human-Dimension framework (Figure 01). 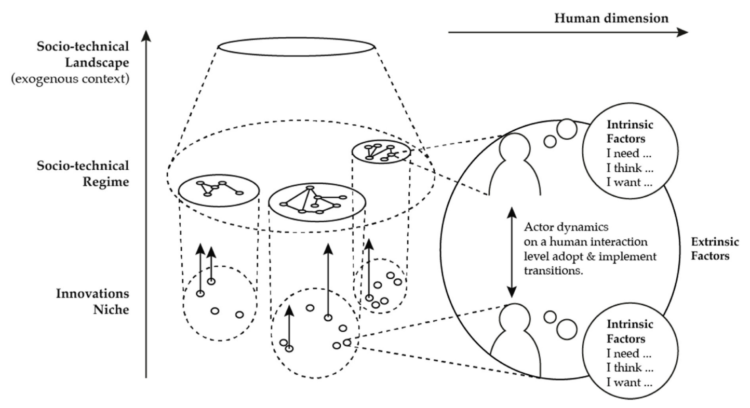 To better understand how the framework could be used, they used a current city-making sustainable development in the Dutch city of Delft (Figure 02) as an illustrative example to apply their approach. First they analyzed the sustainable transition scenario by using the already existing framework of the Multi-Level Perspective by Geels (2005), and they added to that analysis the Human-Dimension. 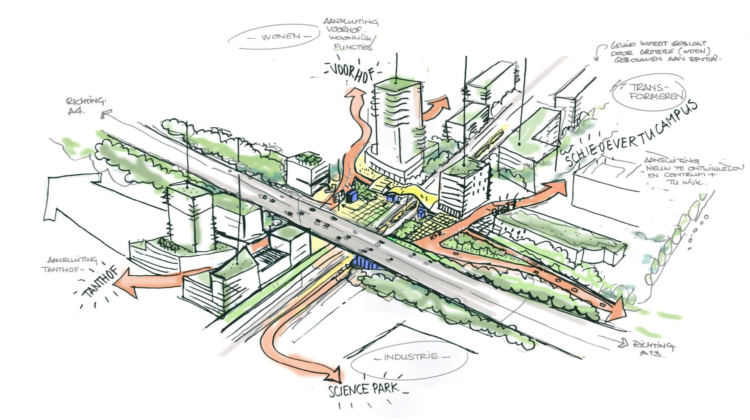 The exercise helped them to understand the relevance of considering this layer during the analysis phase of transitions. The added dimension provides a starting point serving as the operationalizing vehicle of sustainability transition research, this is useful since,  when enacting transitions, within dynamics, the windows for opportunity emerge and ‘make or break’ the enactment of individuals on the transitions (López Reyes et al. 2020). If well, the exercise provides a first step, further research on how to translate the windows of opportunity founded on the researched transition to design actionable steps is welcomed.

If you are curious to know more about their research, you can read the full article in the following link.

Written by Malena López Reyes. The work described in this article is based on the journal paper written in collaboration between Malena López Reyes, Willem Zwagers and Ingrid Mulder. The paper entitled “Considering the Human-Dimension to Make Sustainable Transitions Actionable" was published in the special issue of the "Human side of Sustainability" of the international Sustainability Journal.