Designing for Calibrated Trust for Acceptance of Autonomous Vehicles

In the past decade has seen car manufactures pour nearly 4 billion USD into the development and deployment of autonomous vehicles. This money was seen as an investment into the future of mobility with an optimistic release of fully automated vehicles in the early 2020’s. However, the development of autonomous vehicles has seen two prominent road blocks. The first is with regard to consumer acceptance (Bienzeisler, 2017) and the latter regarding regulations (Fagnant and Kockelman, 2015). The current project focuses on the aspect of consumer acceptance, more specifically building trust for increased acceptance. Below, barriers faced by the acceptance of autonomous vehicles have been highlighted:

We can see that the other obstacles to autonomous vehicles (3-7) have an influence on the user trusting autonomous vehicles, leading to either mistrust or distrust depending on the outcome. However, it is important for trust between autonomous vehicles and user not be at either extremes (distrust or mistrust). There is a need for calibrating trust. Calibrated trust can be defined as “The process of adjusting trust to correspond to an objective measure of trustworthiness”. In simpler terms it is the ability to balance the capabilities of the autonomous system with the expectations of the end user. Research shows that calibrated trust allows for better implementation and acceptance of new technologies. 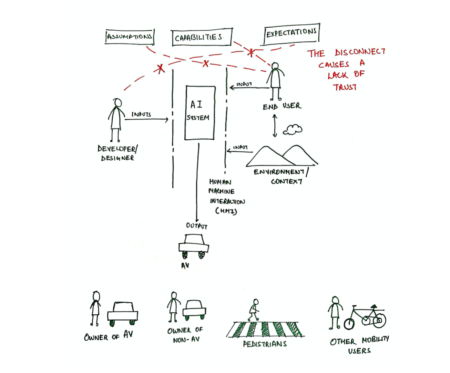 Daziano, R.A., Sarrias, M., Leard, B., 2016. Are consumers willing to pay to let cars drive for them. Analyzing Response to Autonomous Vehicles