Understanding and promoting 'making' in the context of public library 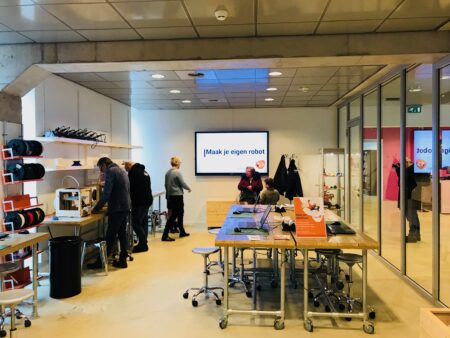 The MAKERLAB project aims to understand and promote ‘making’ in the context of public library in the Netherland. Making is considered to be a key agent for ensuring the sustainable future of (public) libraries in the Netherlands, by refreshing their image and their role for the communities of reference. At the same time it is a challenge too. The spontaneous, impetuous sprawl of makerspaces in Dutch libraries is as well a risk when not properly studied and accommodated, as irrelevant applications might waste the great potential of the innovation.

Adopting a design-through-research perspective, the research consortium (formed by key agents in Dutch library community and Dutch education and research landscape) will design, test, and evaluate different types of makerspaces in 4 public libraries in the Netherlands, as a setting of co-created living labs, and repeat twice the co-creation cycle. The goal is to develop innovative library makerspaces which are respondent to the library / community conditions and are oriented towards the future, by connecting spatial design, programming and users/exploiters to maximize the potentials of makerspaces and of their cross-fertilization impact on other library services and public roles.

The project’s findings will inform and inspire a healthy development of makerspaces in Dutch public libraries, according to the mission of the founder institution: “The Pica Foundation promotes and stimulates the provision of scientific and public information in the Netherlands. It does this by subsidising projects and activities that transcend the interests of individual libraries and promote cooperation among libraries. These projects should strengthen the role of the library in the information chain”. One major results of the project will be to feed / create an interdisciplinary network of specialists on the making culture in library context, and on the future of the library institution.